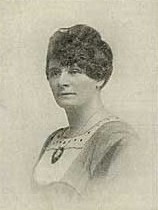 Community Correspondent John Dane loves learning about local history. Here, he shares the story of one of his heroes, who fought for women’s suffrage and faced jail for her actions

Helen Crawfurd was born Helen Jack on November 9 1877 in the Gorbals, Glasgow. She was the 4th child in a family of four daughters and three sons.

While still as child, she moved to Ispwich, where she was educated. When Helen was 17 , the family moved back to Glasgow to the middle-class district of Hyndland. Helen was shocked by the poverty and conditions that working class people faced and was made aware of politics by her parents, William and Helen Jack.

Helen married Reverend Alex Montgomorie Crawfurd in 1898. However, she soon rebelled against the theological teaching of the church, believing it discriminated against women. She joined the suffrage movement in 1900 and in 1910 joined the Women’s Social and Political Union. Helen fully endorsed the militant actions of the Pankhursts in attempting to gain the vote for women. In 1912 she was arrested and sentenced to one month in Holloway prison for breaking the windows of  the Liberal Minister for Education’s residence in London. 1913 again saw her arrested for trying to protect Mrs Pankhurst from police brutality at a meeting in Glasgow. She was later release and re-arrested the following night for breaking windows at the army recruitment offices. She was sentenced to one month in Duke Street Prison in Glasgow. It was here that she staged her first hunger strike and eight days later she was released. Prison life did nothing to dent her passion; she went on to become one of the best known and most popular members of the Scottish suffrage movement.

In 1914, she left the SWPU because of its pro-war stance. She was appalled at the infant mortality and deprivation in Glasgow slums. Around 1912, Helen’s speeches, although still with Christian content, leaned towards a socialist message.While taking a leading role in the anti-war movement, Helen was very active in the 1915 rent strikes. She was appointed Secretary of the Glasgow Women’s Housing Association and was an important figure in rallying housewives to fight rent increases. Her efforts along with Mary Barbour, Agnes Dollan, Jessie Stephens and other women activists resulted in the Rent Restrictions Act of 1915. This act benefited tenants all over the country.

Helen accepted an invitation to travel to Moscow for the Second Congress of the Communist International in 1921. Her journey there proved somewhat arduous. her passport was confiscated by the Norwegian authorities. Avoiding the police, she made her way to a fishing boat which carried her out to sea, where she boarded a cargo vessel. It took her to the port of Alexandrovic and from there she made her way to Moscow, where she had an interview with Lenin. She joined the newly formed Communist Party of Great Britain in 1921.

In her later years, Helen moved to Dunoon, which became her home. Helen never retired, still working for the casue fo women and for the working class community of her town. In 1945, aged 68, she was elected to Dunoon town council and at 75 she was Chairperson of a session of the Scottish Congress of the Communist Party.  She kept up considerable correspondence on both local and international affairs in the press, Just days before her death, one of her letters appeared in the Daily Worker.

Our vote, our voice: support with voting for people with learning difficulties
Are smokers avoiding inpatient treatment for #mentalhealth problems?