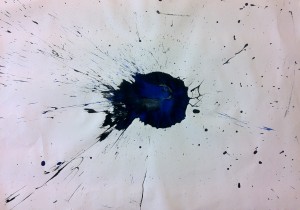 I work with people who have often experienced sudden,  massive changes. Like the carpet has suddenly exploded underneath them, and they haven’t had an opportunity to see what happened before  having to switch to survival mode, and get through the new changes . Moving forward, without a chance to even really see the impact of the explosion.

This is a common scenario for children and young people who come in to foster care. In my work with them as an art therapist, a big thing is reconnecting with that moment in their lives, when everything changed. In art therapy, words aren’t usually the most important form of communication – you can describe things all you like, but sometimes the process of making an image and seeing the resulting piece of work, can be the most important experience in understanding, processing or communicating something.

This picture is something I made, in response to spending a lot of time with this feeling of everything suddenly exploding, in a way that meant nothing will ever be the same again. I poured a big puddle of paint into the middle of the paper – blue and black and blue and black, really poured it on. And then I slapped my whole hand into the puddle. Just once. One moment, one impact. The result? Paint went everywhere. This image doesn’teven begin to show that – it’s more the capturing of the sense of the moment. I was covered in paint (not sure why I didn’t see that coming…) as was everything in the vicinity. And even though a lot of things were wipe-clean and recoverable, the point was that the effect of the explosion touched so much, literally. Barely anything nearby went unscathed. And the paint has never quite washed out of my trousers.

For me, this was such a valuable  way of  trying to understand and communicate what that moment is like, when the carpet explodes from underneath you and life will never be the same again. How everything around you is affected, sometimes irreparably. And how bits of you get lost forever in the impact, in this case to be wiped away. And the parts of you left (here, the paint that has stayed on the page) are all over the shop. Scattered and disorientated, and not necessarily still connected.

It’s in this state that so many children and young people come into foster care. Through no fault of their own, the environment around them, and the people in it, have had this effect. Some of the damage will be repaired over time, with the nurture and support of good carers. But it takes a long, long time – and some of the impact will never leave them. And so often, we don’t have words for what has happened to us when it is something so all-encompassing and significant. When we have been blindsided and it’s a total shock, we don’t even know what it was that happened.

But we can know how it felt, and how it feels now. And it’s then that art-making can be so brilliant, because you don’t need to describe something in words. Just to use the materials and see what happens can be enough – the process shapes itself. But also, feelings can be discovered and communicated in a way that words won’t ever reach. Like my hand-in-the-paint-puddle-paint-going-everywhere process, and the resulting image that captures a moment of this.

And for all the words I could write about the process, the impact, and the feelings communicated, I don’t think it will ever quite cut it – until you pour a puddle of paint onto some paper and see what I mean, for yourself.

DISCLAIMER: Paint might go everywhere. Be prepared for that!

Celebrate with us on April 24
Rights for Life: this year’s big event in Scotland for #mentalhealth

One Response to Paint explosions : some things, words can’t explain