By Mindwaves on April 5, 2013 in Community activity and Inclusion, Events, Mental wellbeing, Stories

Like other Mind Waves reporters, I went along to this year’s Scottish Recovery Network Gathering at Murrayfield Stadium, Edinburgh.  Now, I’m new to all this.  I had no idea what to expect, who I would see, or what would be going on, despite having a programme brochure for the event.  I went in green and blind.

Among some of the ‘visions of recovery’ was the idea of having places in the High Street across the country where people could drop in for some mental health refreshment or guidance, and drop back out again any time they felt like it. 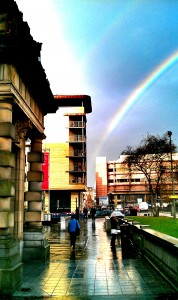 Rainbow after the rain

After these informative, quick-fire presentations, we came to the ‘Keynote’ speaker, Dr.Rachel Perkins OBE.  When she started to speak, the whole mood of the conference chamber changed.  Her approach was witty and no nonsense, coming from what can only be described as a clear and lucid understanding of the issues faced by users of Mental Health services.  This because she herself is an active user of such services.  Dr. Perkins had a delivery style so dynamic it kept us all agog.  Her most important point, for me, was the dire need to simplify what can be a complicated, multi-agency process when seeking help.  My own experience was just as she suggested, being referred from one agency to the next, going here to see him, there to see her, over the boundary to see someone else who could help, then back to her and him….and on and on…   Such a state of affairs would send anyone round the bend, and may even stop people who really need help from even trying to find it.

Dr. Perkins presented a solution to this shoddy, all over the place framework – a one point stop where diagnosis and prognosis can be made, and a proper customised course of action or assistances can be made.  From then, one could access services as and when required, as we do with a Doctor for physical ailments, instead of being looped in to a never ending  plethora of agencies and possible ‘solution providers’.

So much was covered over the day, but I left with a complete impression that people like Dr. Perkins are actively trying to change things for the better.  I might have went in green and blind, but I came out as a rainbow with high definition vision.

Dreams come true in Paisley
Recovery, Social Media and Participation in our own destiny