By editor on February 10, 2018 in Mental wellbeing, Stories 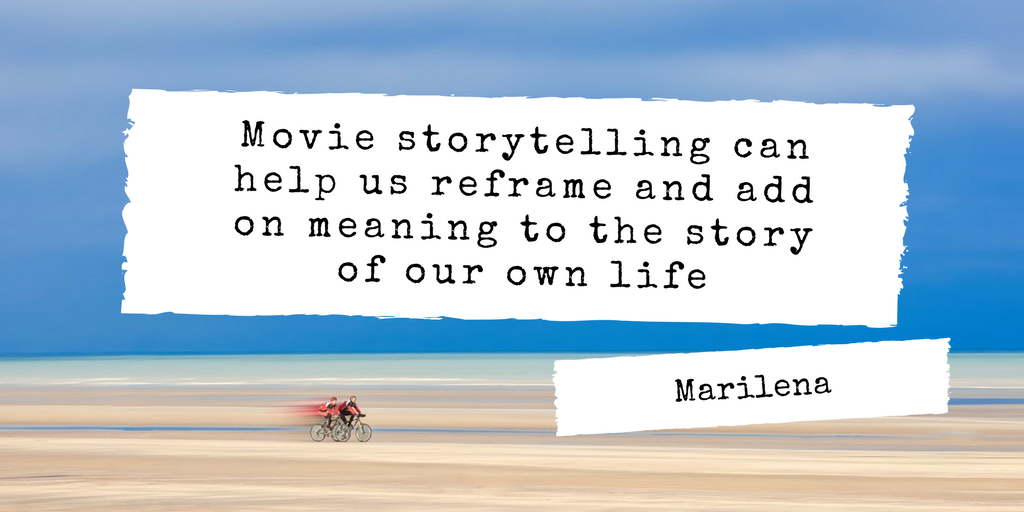 Community correspondent Marilena gives us an academic take on finding meaning through movies.

We all know that human beings love storytelling. One of the culturally-valued ways to listen to a story is by viewing a movie. Although movies are often considered a way to relax, to escape reality, or to be entertained, they also can give us important messages for our own life.  What we believe about ourselves and others after all is a story. Movie storytelling can help us reframe and add on meaning to the story of our own life by mindfully making the connections between our story and the story on the screen. In theory, the meaning I will give to a movie might have only few things in common with someone else’s interpretation. In reality though, movies as they are destined for large groups of people, can be they are meant to be interpreted in more or less similar ways. After all, movies, as a product to be consumed, need to be successful by being able to produce meaning in more poetic or more fixed ways for the vast majority of people.

Watching a film with a relatable relevant character could help us in unexpected ways as they can help us feel that we are not alone especially in times where we feel that no one understands our point of view. In more general terms, even we do not share many things in common, we could also empathise with characters of the movie. Additionally, by watching a movie we can project on a character the pieces of the self that we would like to change, enhance or get rid of, without experiencing the consequences. I will now give an example of a movie that could be connected with meaning-making for someone’s life with a focus on mental health and well being.

Girl interrupted (1999) is a drama following Susanna’s admission to a mental hospital in the sixties after she attempted to commit suicide. Ryder’s (Susanna) acting leaves open for interpretation if she really has a mental disease (borderline personality disorder) or if the real problem of the character is the relationship with her family and her uncertainty for the future in the society she lives in. On the other side, other characters Lisa, Polly, Georgina and Daisy are portrayed in more conventional ways in relation to mental health problems, although it is still questionable if they have a ‘condition’. Thus, this film leaves open interpretation on what constitutes mental health problem. The most important idea in the film, in my perspective, is that mental health problems even if not essentially ‘real’ problems still need to be ‘cured’ or better managed in order for one to be freed (either from the institutionalised mental health system either from the troubles caused by the high expectations of one’s family or one’ s society). It is a film that de-stigmatises mental health and most importantly, makes us easily empathise with ‘normal’-crazy characters.

Box Sets – “I find I’m using them as part of my coping mechanism”
Happy Valentine’s Day – Love Yourself!