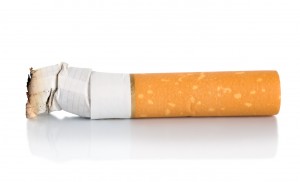 As of March 31 of this year, it is illegal to smoke anywhere on NHS grounds. We all know that smoking is bad for our health and most people have come to accept that it is banned in public places, but what about people who don’t get to choose where they go? People who are detained under the Mental Health Act have no choice but to be on NHS grounds- and that means no smoking.

Two of our Community Correspondents, with very different perspectives, give their views on the ban.

Should people who are detained in psychiatric hospitals be allowed to smoke?

Donald says no- you shouldn’t have the right to smoke

I hate smoking. I hate the smell, it makes me feel sick. I don’t think you should be allowed to smoke anywhere in public. You should only smoke in your own home, and if you have to be in hospital, you’re supposed to be there to get better, so the staff should stop you smoking.

Smoking is bad for your physical and mental health. It’s not fair on other people who are not well and it’s not fair on staff if people are smoking. NHS grounds should be smoke free: simple as that.

I don’t smoke, but I think people should have the right to choose, as long as it’s not affecting anyone else. When I was in hospital I saw people kicking off because they want a cigarette. It would be worse for everyone if they’re not allowed one.