By editor on October 17, 2014 in Arts and creativity, Events 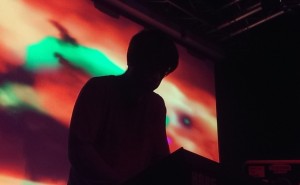 Last Thursday, the Art School played host to Glasgow bands Atom Tree and Machines in Heaven in an exciting and powerful night of electro, shoegaze, post-rock, post-electronica. Our headliners Machines in Heaven, create beautiful, otherworldly sounds with the use of synths and guitars that seem set on a cosmic trajectory.

Before the gig I was lucky to grab a few minutes with our resident space jockeys to ask them what it means to them to take part in this year’s Scottish Mental Health Arts and Film Festival.

“I think it’s close to all of our hearts,” said Davey Gwynne, “because we had a member leave because of mental health issues.”

Greg Hurst explained, “We’ve all had close friends, girlfriends, friends and family who’ve experienced mental health issues as well. I mean, most people are susceptible to some form of issue.”

Davey continues to tell me that he feels “It’s important to raise awareness – it’s one of these causes you need to continually raise awareness for because it’s something that’s not on the surface, it’s not immediately noticeable, and it’s very complicated because human nature, and human emotion is a very, very large thing and very complicated. Sometimes it’s not only very difficult to pin down the problem, and treat the problem, but it’s very difficult to actually realise there is a problem.”

Acts like Machines in Heaven who support the SMHAFF, giving a fresh voice to the issue, can be quite powerful in reducing the stigma of mental illness.

“Every little helps, everybody gets involved and puts in their two cents, then the world changes a little bit. That’s how anything changes,” says Davey. “There is a lot of stigma surrounding it and there have been a lot of questions that haven’t really been talked about or answered frankly, or enough, for people to actually take it in and digest it. So yeah, I think it needs to be talked about more and continually talked about.”

The SMHAFF has several events in this year’s programme on the topic of the healing power of music as therapy for mental illness. I was keen to ask the band what they thought of music as a positive influence for mental wellbeing.

Connor Reid shared with me that music gives him a great sense of purpose.

“I’ve just always been drawn towards it. I went, when I was younger, from instrument to instrument trying to find the one I really liked, and just throwing hissy fits when I wasn’t really good at it at first, but then realising eventually that’s life, you just need to keep at it. The instrument I originally stuck with was guitar, but without music, I literally don’t know what I’d do with my hands if I didn’t have instruments and computers to make music with.”

To me it seems like music is more than just an exciting career choice for the band, but something they need, something to give them purpose and guide them. For Greg, he found music to be a transformative experience in his life:

“I started DJing first and then later on realised I wanted to make music like that, so for me that transformative experience was the first time I actually made a computer play sounds.”

The idea of music as a medium for giving positive transformative experiences really fascinated me, and I wanted to know more about these moments, how the members of Machines in Heaven experienced them through the creative or performing process. Davey told me that for him,

“[This] happens quite a lot with sound more than music, if that makes sense? I think you can get lost playing a guitar, but the transcendent moment occurs when you’re layering the sounds and making it all come together. When this happens you get more lost in the music, I think that’s when the transcendental moments happen.” He laughs. “It’s all hippy bullshit, but that’s what it feels like for me when I’m making music!”

It was a real pleasure to grab a moment with the guys to explore what their music means to them, gives them a sense of purpose, and the drivers behind the creative process.

You can read Pete’s review of the gig at the SMHAFF website.