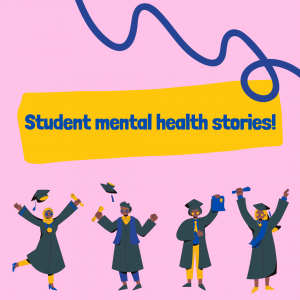 This week on the blog we are publishing our last student mental health story for the time being. This series was inspired by the Think Positive Hub, a website designed by NUS and Mind Waves. The online hub brings all of the projects, services, resources and news relating to student mental health together in one place, for students and those who support them, to easily access. Read on for Bryony’s incredible piece where she talks lockdown, mental health and navigating university.

I was seventeen years old when I started University. I thought I was self-assured, creative, confident, and perceived to be ‘scheme-as-f**k.’

Getting an unconditional to study English Literature at the University of Glasgow was a pure celebration in my household, it felt as though I had met some unobtainable goal. I was delighted, and this intense joy was only amplified by my proud family.

However, this didn’t align with the vision I always had for myself. I wanted to apply for drama school and deep dive into my creative consciousness, move away to a big city, and to be fully independent. This was never financially feasible, and I was underage, so I felt restricted in my choices. Ultimately, I decided that choosing to expand my critical thinking skills, would only magnify any other skill I already possess – a literar(l)y goldmine.

My brother and I were the first in our immediate family to become university students. There was an expectation of this whole new world opening, beyond Airdrie. As a self-appointed social butterfly – I was buzzing to meet new people, experience new things, and to hold my head high as a newly appointed academic queen. The reality (as so often happens) turned out to be rather different.

For the duration of my degree, I tried to determine the reason why I felt university had went so wrong for me; Maybe, it’s because I didn’t go to freshers and didn’t establish myself in a friendship group – all seemingly formed well before my introductory lecture. Maybe, it’s because I stayed in Airdrie, and I didn’t experience the comradery of living in student accommodation. Maybe, it’s because a few months prior to starting university I had just entered a new relationship, so I was hyper focusing on maintaining, nurturing, and experiencing that part of my life.  Or maybe, it was because I stripped myself of my own creative identity, one I had been constructing since the age of eight. Going cold-turkey on exploring the performing arts – my sole creative outlet – was damaging to my sense of self. Before I knew it, I woke up one day and couldn’t recognise who was looking back at me in the mirror.

Realistically, the problem arose within the cocktail of these common issues. At the time it was tricky to have perspective. I was disappointed with the anti-climactic nature of my university life where I felt like an outsider on the cusp of different social dynamics, and I was embarrassed to have no specific interest to encourage my academic or creative identity. This delirium heightened as I processed my angst through binge eating and developed a tenacious struggle with body dysmorphia – I turned to habitually smoking weed every day as a form of dissociation, and the deconstruction of my creative identity and personal identity furthered. I never wanted to die; I just wasn’t sure how to live.

After travelling the summer between second and third year, something changed (cliché, but stay with me). My creative spark was reignited as I spent weeks in an unfamiliar environment with my best pal, drawing, and finally opening-up about the way I had been feeling. It gave me an artistic outlet to abstractly articulate my feelings, but more importantly it gave me the human connection I had been craving. Of course, that didn’t solve any of my problems, but it did launch me into an introspective discovery where I knew I had to make radical changes in my life – I just needed the courage to do so.

Arriving back to my third year, I finally got to choose subjects that interested me. Specifically, Literary Theory and Creative Writing fiction. Despite my attendance still being exceptionally low, I was settling into the rediscovery of my curious mindset, and with the guidance of learning about important philosophical theories in my own time, combined with having a pleasurable and rewarding way to articulate my sense of self – I started to feel like a developing person again.

Evidently, I had been developing continuously as the years had passed but when struggling with your mental health there’s an illusion of living in a motionless image. My memory, still like a sieve, laboured to see the bigger picture of all the things I had been learning. Yet, I was improving. The barriers I had built-up, started to lower as I craved collaboration with other creative people. I was more open to developing healthy relationships with others, and with food. I felt more confident in expressing my intelligence – even if I was conveying it in a different way from those around me.

At first, I was agitated. Just when I started to feel like a social creature again, it had been stripped away from me. But if I had learned anything in the last few years it was that I was resilient. I could make my way through lockdown whilst providing support to the people I love, and I was no longer hesitant to reach out to the people who I felt a deep connection with – an assortment of folk I met through work, home, and university.  I spent all my time in my parents’ house, where I was well looked after, and I was sober for the first time in two years (apart from the odd edible) so had a clearer understanding of the linear timeline in which I had been existing.

After twelve-weeks of living at home I made the decision to move in with my then-boyfriend who was living alone and working in a supermarket during the pandemic. I fell back into the familiarity of smoking grass every day, and I spent a lot of time alone as he worked long days. Though, I was content. I had been accepted for a coveted spot at my university to complete a creative writing dissertation, so I felt uplifted and inspired by this achievement. I was ready to smash it. For my supervisor, I was appointed a poet. I was immensely thrown-off by this as I had never written poetry before, nor had I expressed an interest. Admittedly, I never felt any connection to poetry, only prose, and can distinctly remember calling it ‘wanky’ during a presentation in first year. The pairing, nevertheless, was an unreal move by the course convenor – who clearly knows what they are doing. I got shoved into the world of indie press poetry pamphlets and found a new multifaceted passion that I felt encapsulated my own myriad of complex emotions. My appreciation of the poetic vernacular of the West of Scotland ‘scheme’ dialect, the abject isolation of lockdown, and personal experience of detachment that once obstructed me became my superpower. Everything I had been feeling and experiencing through-out my university life was spewed out into a surrealist poetry collection, and it was a deeply satisfying way to end my academic journey.

I did it. I survived university! For the year following, I decided to take a well-deserved break from academia to work in a chill stationary shop. I have continued to write poetry and feel confident enough to explore and assert what I want in my life. Albeit with not much structure or no plan, I have been sailing along the past year – taking it as it comes. It was within this liminal space where I felt able to gain enough perspective to fuel major life changes like respectfully ending a five-year relationship and to stop depending on weed every day. Using the transferable skills I learned at university, I have had the confidence to revisit my first artistic love: acting. I still need to look in the mirror to remind myself I’m here from time to time but I am more empathetic towards the talented and complex woman looking back at me.

I am now in the process of applying for a creative writing master’s (fingers-crossed for me). I feel ready to fully commit my focus towards something I am passionate about and I am excited about the future. In the end, university, and more specifically literature has played a pivotal role in my self-development.  My identity as someone from Airdrie, and as someone who went to university felt like opposing structures; both have become integral parts of my identity. I think I would always have found writing as a means of survival, but university thrust me into the open arms of poetry and revealed a world of theory and criticism that I would struggle to access alone.

I will always look back fondly on my university experience, despite my struggles.