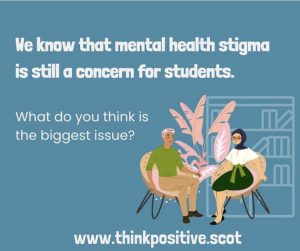 Think Positive, a Scottish government funded student health project at NUS Scotland, (National Union of Students) are working with students to coproduce a National Student Mental Health campaign! The idea for this campaign was brought about after Think Positive commissioned research to evaluate the effectiveness of student mental health support in Scotland, and one of the recommendations from the research was:

“NUS Scotland could work with the Scottish Government to lead a national awareness-building campaign to reduce stigma relating to student mental health and to challenge preconceived ideas about who support is for/not for.”

Think Positive have been working with a group of students with lived experience to coproduce a National Student Mental Health Campaign which focuses on stigma.

The group have highlighted four key areas that the campaign could focus on and they have decided the next step is to ask the wider student population to vote on which they think is the most important. This feedback will be used to shape the campaign, which will launch very soon!

This is a great chance for students to be directly involved with impacting real change. Click here to be taken to the contact form at Think Positive. They’re looking for your name, institution and pronouns, and will be in touch with you soon about being involved with the campaign.

If you’re a student with opinions, but you don’t want to be involved in producing the campaign, why not vote in the poll? Click here to be taken to the poll and answer the question: We know that the stigma around mental health is still a concern for students. What do you think is the biggest issue?