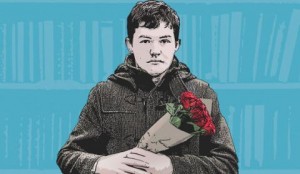 Last week, Rosie (Mind Waves Project Manager) offered me the chance to attend Declaration, A Festival of Health and Human Rights. Film screenings, debates, performances and workshops were inspired by each article of the 1948 Universal Declaration of Human Rights.

“Don’t turn away and pretend you can’t see. I am who I am because I am me.”

Did you know that 1 in 5 people in the UK live with some form of disability? And that 90% of people with disabilities reported that they were bullied or harassed in the past year? Or that an estimated 97% of hate crimes against disabled people go unreported?

I Am Me follows gardening enthusiast Charlie, a 24 year old Scot who’s just moved to his own flat. Charlie loves reading, has a penchant for gnomes, pottering about in his garden and Chinese take aways. Charlie also has severe autism and despite love and support from his big brother Tom and a friendly neighbour, his different-ness catches the attention of bored local teenagers whose terrorising antics cumulate to a disastrous climax.

In many ways I Am Me is a thought-provoking and sensitive but it is an unsettling film. We watch as small acts of thoughtlessness and cruelty evolve into full on extortion and violence. It’s heartbreaking to see Charlie misunderstanding lies and theft for friendship; and infuriating when Tom mistakes Charlie’s growing introversion for grief. Warning signs of Charlie’s increasingly depleted well being were noticed by those around him, but not meaningfully acted on.

The element I found most realistic was the disconnect between the branches in Charlie’s support network. Charlie’s support worker was a rare visitor, who was invested but busy; his neighbour was concerned but wary of prying; and his brother stressed by the warring demands of his work and family-life. Certainly friends and family who receive health and social support have, at times, experienced a lack of support caused by ineffective communication strategies.

True, too, are the effects of discreet, seemingly insignificant events which have a cumulative effect on a person’s health and well being. Small acts of cruelty like shouting insults and deliberately littering on a beautifully manicured and loved garden can prove wearing, especially to people who are already vulnerable. A 2012 report by the Equality and Human Rights Commission found that low-level anti-social behaviour was the most reported hate crime. But that police and support agencies were not piecing these incidents together. Add to this the estimated 97% of unreported hate crimes against disabled people and the picture is even more worrying.

I was particularly challenged by this film to pay more attention to what’s happening around me. Do I really ‘see’ people who are disabled, or have more complex needs? Have I witnessed and managed to overlook bullying on the street or on the bus? Or have I explained away harmful incidents and reinterpreted them as harmless ‘banter’? I guess that’s part of the problem we have as a society: we want to give people privacy and the benefit of the doubt. It’s far easier to avoid the conflict of facing injustice head on.

You can watch I Am Me here, as it’s available as a free resource and learn more about the I Am Me community project here which aims to raise awareness of disability hate crime. If you do watch it, please share your thoughts in the comments section.

There will never be a statue for me. Celebrate the invisible women on #IWD2016
A tribute to Sandy Hutchison, award-winning poet