By editor on April 27, 2015 in Community activity and Inclusion, Participation 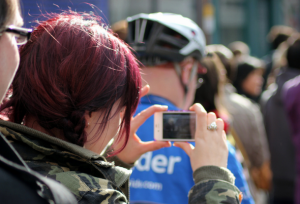 Last week I blogged about the effect that being involved in grassroots politics has had on my mental health. Put simply: the highs are really high, but the lows are really low.

I set myself some rules to help keep myself safe – and I’d like to share some of them with you.

Work towards something, rather against:

In the process of recovery from depression and anxiety, I said I would only let myself participate in debates, activities and actions that were working towards something -rather than fighting against something. Its a subtle shift – and much of it is about language, but I’ve swallowed enough of my own anger in my time that I’m surprised I’ve not choked on it. I’d love to say I was a perfectionist when it comes to this, but I’m a human being (and I do get grumpy, especially with the Internet) but I use it as a bit of a mental filter – before having a rant or getting angry at something outside my control, is there something positive I can do to channel the energy better?

Widen the cracks you exist within:

A few years ago, when I was deep into dealing with my newly politicised headspace, I read a really interesting book by an academic called John Holloway called “Change the world without taking power.” It stuck with me. I think it will always stick with me – I’m always recommending it to people. I realised that I needed to be well enough to do good for me and others in the space that I was already occupying, rather than leave in a rage and shout at it from the outside. I need to be in the places I need to be- and we all need allies.

Some of the biggest, most transformative and empowering things that you can politically  do can feel like the smallest most mundane actions – local, community issues can be (and are) as important as the big old television debates we are watching now. There is so much we can do now that is beyond “Party Politics”, go and see what is there, what you can do to help and if it ain’t there, can you make it happen?

Pick your battles:
You can order an argument on the internet quicker than a pizza. If you want to feel like crap for an evening, you can, thanks to the wonders of Facebook groups and Twitter hashtags. I’m not saying its all bad, I just have to tell myself to prioritise my debates and arguments to pursue. I need my energy for other stuff these days. I try my best to stick to respectful discussions and disagreements,I  try not take things personally and I avoid personal attacks (even politicians). Social media is as much a tool for empowerment, as a tool for disengagement. It’s a tool.

Keep yourself safe:
Finally, keep yourself safe. You are doing this because you want to do this, you don’t need to do anything that you feel uncomfortable doing. Your wellbeing is the most important thing. If you feel burnt out, rest. If you can’t go to something, don’t. I love the concept of spoon theory, worth having a wee read of it if you haven’t checked it out. Spoon theory stops me going to every single event, protest, lecture, fundraiser because I feel like I should. I give myself permission to say no. And that can often be the most empowering piece of kit you can have in your political tool kit.

Author: Jennifer M Jones, Researcher. University of the West of Scotland. Jennifer is currently a project coordinator and a part-time researcher, completing a PhD on major events and social media with a focus on citizen journalism as a device for community empowerment and how digital tools are used in an events and cultural context. She is a member of the Scottish Greens and coordinator of the Glasgow Southside sub-branch group.

Warning: politics can be bad for your mental health. How @jennifermjones survives and thrives
Running has changed my whole mindset… and my life