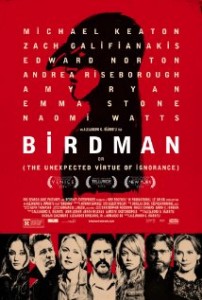 A review from our Community Correspondent Emily McCurrie @caminosmem

I saw this film before the Oscars and it hadn’t originally caught my eye, but my partner suggested it and after seeing the trailer I really liked the look of it. I’ve become a bit of superhero junkie of late but unfortunately was left a little disappointed as I expected more superhero themed action. However, putting that aside, it’s a great film for exploring the world of acting and how people want to leave their mark on the world.

I’ve always enjoyed watching Michael Keaton, who has the main role as Riggan Thomson, even looking a little more wrinkly than the Beetlejuice character I’ll always remember him as (don’t say his name out loud three times!) I find him intriguing to watch as he has that edgy unnerving look in his eye just like Jack Nicolson. Not that that made it any less uncomfortable to see him walking through the busy city streets in his underpants!

Set in the theatre where Riggan is directing as well as staring in a play, we also meet Edward Norton’s character, Mike Shiner, who is another well known actor. We see him on stage as a cocky, confident and talented actor but who reveals to Riggan’s daughter that it’s in the ‘real world’ that he feels like he’s acting.

This made me think of the idea of a ‘false self’ and the roles that we play throughout the day. Sometimes these roles are helpful and make us feel more confident. Perhaps at work you are confident and assertive when being in a professional role, but within your own family and with your friends you may be very different, perhaps playing a role that others expect of you. Or maybe it’s the other way around and you feel comfortable around friends and family but have that crisis of confidence whenever you enter the workplace. I know how different I can be at work in comparison to when I’m with my partner, and how comfortable I feel being vulnerable with him but always wish to be seen as oozing confidence when at work. I suppose it’s a way of coping with the pressures we are dealing with and hoping to live up to other’s expectations of us.

This film also explores the desire to leave some sort of mark on the world, some kind of legacy, something for us to be remembered by. Riggan seems to have this desire. As a once well known actor he’s trying to regain success and be remembered as an accomplished Director. This is openly crushed by an outburst from his daughter including the words, ‘You’re not important, get over it!’

I’m not sure I have an overwhelming desire to leave a legacy, but I do want to have a positive impact while I’m here. To help others and to make the most of my life. How would you like to be remembered? As successful, charitable, a family person, as an adventurer? Or are you happy to remain hidden and enjoy a more peaceful life? At times I can really enjoy feeling insignificant, that I’m only one person on this planet covered by billions of people. There’s safety in that for me as I know I’ll be remembered by the people who matter to me and I’ll remember them.

I’d recommend this film as something a little different but that is thought provoking. Just don’t any expectations after seeing the trailer! It gets a 3 out of 5.

What makes me feel free
Permission to dream #sdsdream2015