By Mindwaves on March 29, 2012 in Arts and creativity, Community activity and Inclusion, Mental wellbeing, Organisations and groups, Stories 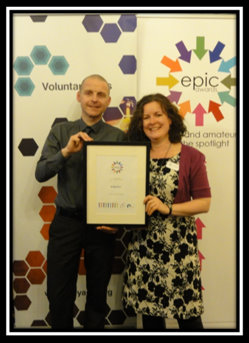 Paisley based community drumming group The Buddy Beat has won a national voluntary art award. They have been announced as the winners of The Scottish Epic Awards 2011 for their inspiring film “Keep the Beat…Our Journey in Rhythm.”

The Buddy Beat is an adult drumming group for people with mental health issues, born out of a music making social inclusion project at Paisley’s Dykebar Hospital and was created by Lead Occupational Therapist Jeanette Allan, Karen Auld, Senior Occupational Therapist and Community Musician Dr. Jane Bentley. Created to promote social inclusion, its aim has always been to involve people at all stages of their mental health journeys, from the hospital ward to the wider community.

Buddy Beat group has gone from strength to strength and have played at more than 100 events from as far as London to Edinburgh. The group decided to tell the story of its members by means of a short video documentary, hoping this would not only tell their own story, but encourage others to get involved in arts activity for the sake of their own mental health.

The entire process took five months to complete and the film was privately shown to the group in December 2010 and then at a premiere event and in April 2011 attended by around 100 invited guests including councilors, health workers, family & friends.

The film has taken on a life of its own, leading to further partnerships between the group and several organizations. It has been sent out in newsletters and shown at conferences (of both health and arts organizations) and used in professional training to broaden engagement with arts practice.

Jane Bentley, Community Musician, responded to the award: “Buddy Beat was initially set up as a social inclusion project –– and you can’t get more inclusive than winning a national arts award! It’s a real testament to the tenacity and enthusiasm of the group members, who funded the film project by their own efforts, as well as developing the courage to tell their own stories.”

Buddy Beat member Tom Chalmers was heavily involved in the film making process. “I have never done anything like that before. There was a tremendous amount to take in, I was interviewer, interviewee, narrator, location manager, producer, wardrobe- you name it I did it! When I first heard about the awards I was told we had made the final six which stunned me, but then when we got that magic call to say that we had won The Scottish Epic Award I just couldn’t believe it and I was on such a high. My head was somewhere between Saturn and Mars, and I don’t think I have come back down to orbit yet. When I see the film I am immensely proud of it, and it was the willingness of my fellow drummers to take part that makes it so special. Like the rest of our great group, I am totally thrilled at this honour.”

Jeanette Allan, Lead OT is “Delighted that Buddy Beat has gained the recognition it deserves and is especially as the award is in main stream arts not mental health! The Buddy Beat model has been highlighted as a good practice example in a report ‘Realising Potential: our Own and Others’ being produced by Scottish Government. The model has also been adopted in Dundee, a city that now hosts its own group now called ‘Drumdee’. Buddy Beat are musicians in their own right, raise awareness by sharing their recovery stories and are an amazing group of people who continue to support new people into the group.  Some members are now workshop assistants coming back into Dykebar Hospital to deliver sessions.”

Tom reported that the Epic Award Night in London on January 30th was something very special. “It was a real honor on behalf of my drumming friends to accept this award and it feels like we have been recognised for all the outreach work we do in the community. It is something we will never forget.”

You can learn more about Buddy Beat and gain the link for the film at www.buddybeat.co.uk or visit www.epicawards.co.uk