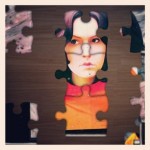 Engaging with people is good for our mental wellbeing.  But sometimes it can be a bit strange.

Night-time, I board an empty train carriage for home with a newspaper to read.  Following behind is a lone woman who rather oddly sits in front of me.  A surprise, but, I accepted she may have her own reasons for choosing to sit opposite me when there was a whole carriage of seats for her to choose from.  I put my newspaper on the little table between us to read in a moment, but the woman suddenly takes it from the table and opens it up instead.

Somewhat embarrassed, I said to her:  “Excuse me, do you know that is a Newspaper I have just bought?”

“Oh yes,” she said with her face hidden by the opened pages, “I’m just having a wee look through it.”

How strange.  I didn’t know what to say.

“Okay then,” I finally said, and watched out the window instead.  A minute later, the woman puts the paper back on the table and relocates to the seats directly across the passageway.  Out of her bag she produced her own copy of the same newspaper and began reading it!

She got off two stops before me.

I got home, amazed by this little encounter.   “What just happened there?” was all I could think, and I’m still thinking about it.  Life can be puzzling, but some things are beyond understanding.

But casual encounters with people can be interesting and rewarding too.  So maybe the question is: how will I respond next time someone ‘harmlessly’ sits in front of me in an empty train?

And what good experiences have other people had? I’m hoping other people have had interesting conversations, heard a different perspective on life, or even met someone (no matter how unusually) who became a friend.

Story by a  community reporter.