Mind Waves sat down for a coffee and a chat with Anny Tahaney, front-woman and songwriter for Glasgow band FAUNA, to talk mental health and music, and supporting your local music scene post pandemic. Our interview is transcribed below.

MW: First off, how does being making music and being in a band intersect with your mental health?

A: I think music and mental health intersect in a number of ways, some positive and some negative. So, obviously the positives, I believe, outweighs the negatives or I wouldn’t be pursuing a career in music. Music is such a great release for everyone, even if you’re not a creator and you’re just a listening, there’s a beauty in music that can sort of resonate with you – even if it’s instrumental, it can resonate with you in a way that defies words. It can communicate with you and help you understand what you’re feeling, even if it isn’t necessarily lyrical. it’s an amazing way to, sort of, unpick your own feelings, especially if you’re a creator.

MW: Do you find that the process of songwriting helps you get in touch with yourself and how you’re feeling?

A: Sitting down and writing really helps me negotiate how I’m feeling and it helps me get to the bottom of a lot of my emotions. Even when I’ve written songs and I go back months on when I’m past the point of my life that was the contextual background of the song- I go back and I read the lyrics or I listen to the melodies I wrote, I can understand what led me to write like that; even though I couldn’t see at the time. Through music, I feel like sometimes you’re able to see the forest from the trees. It sort of elevates you, gives you this new consciousness, this new perspective of how you’re feeling.

That can also be a negative because as a creator, you feel this pressure to authentically convey yourself and, sometimes, if you feel like you’re not getting what you want in the most efficient way, you know, lyrics don’t sounds right or the phrasing doesn’t come across the way you want; it just doesn’t sound authentic. It’s a lot of pressure, I think that’s where the negatives of music and mental health coincide because, you know, sometimes your outlet to explore your own mental health can just confuse it more. That’s the nature of being a creator, a writer.

I feel like there’s also the added pressure of what you create being so subjective that there’s a vulnerability there, and you want it to be accepted and liked. that adds another facet of pressure. But again, for me, if the payoff wasn’t worth it then no-one would be writing.

MW: What about performing, how does that link with your mental health?

A: I think performing is key within music, when you’re standing in front of a crowd and you’re nervous before you go on, you know, that the crowd won’t like you, you haven’t sold enough tickets or your scared about the reception of the songs, or even your own performance. But you’re also able to, sort of, give life to something that you created. You see people enjoying what you are creating and have this moment of euphoria, like this is authentically me, this is everything I set out to do. I wanted to channel myself into this song and give it to people and have them enjoy it. When you see that playing out in front of you, that is just the beauty of performance. It’s my favourite part of being a musician, I’m sure it’s everyones favourite part.

MW: Let’s talk about your experience of being a musician during the pandemic and how that affected your mental health.

A: Yeah. So, when performances were stopped and the industry was forced into this, sort of, lull that was triggered by the pandemic, that creates another intersection with creating music and being a musician and mental health. When anyone loses their job, and sadly many people did during the pandemic, you start to question your position and perceive yourself differently, question your usefulness, the path you’ve chosen, how you’re going to cope. I think those questions were, and are, present within musicians lives. What made that even worse was that the livelihood that they were mourning was continuously advertised as useless, unstable, not worth pursuing; just a general waste of time. When you’ve got that added pressure as well as those other destitute feelings, that’s an incredible disruption to someone’s mental health. And I think that’s what the lockdowns made evident, that the current political climate has made musicians and creatives so vulnerable. That if you take away performance, they can’t survive. The entire constitution of themselves and their chosen career path is completely uprooted and forced into this state of interrogation of whether or not it should even be pursued in the first place. It’s a confusing time for musicians and people like myself who need a side hustle to support themselves while they do music. My entire pandemic became my degree and an internship for a job that isn’t music. For myself it was an incredibly confusing time; I was doing things that was helping me progress, but it wasn’t down the avenue I want to go down. I’ve always been aware that being a full-time musician was risky and for that reason I’ve never committed myself to it fully just sole because of financial fear, fear of how I’m going to survive in this capitalist society! But for the people who have chosen to go down the full-time musician route it’s even more terrifying. People couldn’t afford rent, had to move out of their homes. So, all those micro-aggressions about how redundant a music career is was made evident and was given a platform during the pandemic, it was impossible to ignore.

MW: What hopes do you have for the live music industry moving forward, as things are opening up again?

A: For me, this just reinforces how important it is for consumers to support their local music scene and the industry, and the creatives that they know. That’s who is funding us. Funding is continually being cut for musicians and the creative arts so I hope that people gain a sense of consciousness of how volatile a musicians place is within society and how much people need music as well. It became a source of solace for so many people that aren’t creators. So many people learned an instrument, people started writing, people waited for new music releases as this way to break up the mundanity of lockdown. I hope people come out of the pandemic with a newfound sense of consciousness of how important music is and the necessity of supporting musicians.

MW: Is there anything else you’d like to add before we wrap up?

A: I think, being a musician, there’s always going to be a battle with your mental health. But if you’re really committed to what you’re doing, you’ll always find a way to push through. 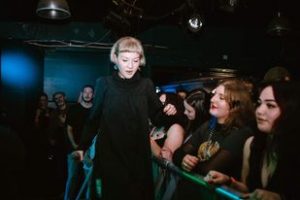 Anny’s band FAUNA are playing a gig at Stag and Dagger on the 13th Nov, you can purchase tickets here if you want to see them play live. (I’ve seen them and they’re incredible!) You can follow FAUNA @faunaglasgow on Instagram. If you have any ideas for a future blog post or you would like to create content for Mind Waves, get in touch via any of our social media accounts. Our Twitter is @mindwaves1 and our Instagram is @mindwaves_scot

Ten years of making waves – ‘It takes a village’
A ‘resilient’ poem from our Community Correspondent, Angela