By Mindwaves on February 8, 2013 in Arts and creativity, Stories 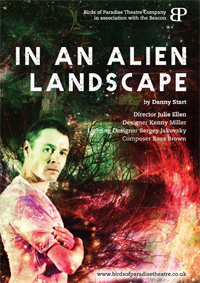 For a better understanding and visual experience of the difficult and sometimes bizarre World of brain injury, something that can happen to anyone at any stage in life, then Birds of Paradise Theatre Company’s “In an Alien Landscape” will be playing in a venue near you this February. Inspired from an actual event, Liverpool writer Danny Start delves into the World of brain injury, consciousness, memory and creativity, brought fully to life by Scots actor Paul Cunningham. Cunninghams’ credits include TV roles in Taggart, Rebus, and more, so expect an eyebrow raising performance! The cast also includes Morag Stark and David Toole, the star of the Paralympics Opening Event.

Wendy Niblock of the Birds of Paradise Theatre Company gives us an outline of the story: “Albie is an ordinary man who experienced ‘a scuffle with death’ which unleashed his creative genie. He can’t stop painting since he emerged from a coma. The extraordinary chaos of Albie’s life and the sound of a continuous rushing white noise in his head drives his compulsion to paint. What is happening to him? There’s no escaping who he was as his past still haunts him; but what lies ahead?”

NOT to be missed. If you can’t make it locally, here are the dates and venues for the entire tour of Scotland! (All performances are subtitled.)

Acumen – encouraging a sense of community
Diary power for YOU