By Mindwaves on July 20, 2012 in Community activity and Inclusion, Events, Further afield, Organisations and groups, Stories, Technology for wellbeing

The beginning of July was a busy time for Professor Stephen Hawking.  On Wednesday 4th July, he was losing a $100 bet with the announced discovery of the Higgs boson sub-atomic particle.  On Friday the 6th, he was in receipt of the AbilityNet special award for accessibility as part of the Technology for Good event in London.  While he wasn’t able to be there in person, he prepared a special film response, which was played to the 200 delegates present at the awards event.  His film included these sentiments:

“The right tools in the right hands can help everyone, regardless of our frailties, to achieve our true potential and advance our civilisation. And I hope that the Technology for Good awards will inspire people to think about the needs of everyone around them and make sure that they can all benefit from the power of computers and the internet to change their lives for the better.”

What does this have to do with the Mind Waves Community Reporters project?  Everything in a way.  As shortlisted finalists at the Technology for Good Awards, we were enjoying a unique opportunity to be part of an event that celebrated the many ways that technology can bring about social benefit.  For myself, Roy and Kevin being able to represent the whole Mind Waves team at such a prestigious event was a real honour, and the tremendous people and projects we met have inspired us with new ideas and energy for the next phase of Mind Waves. 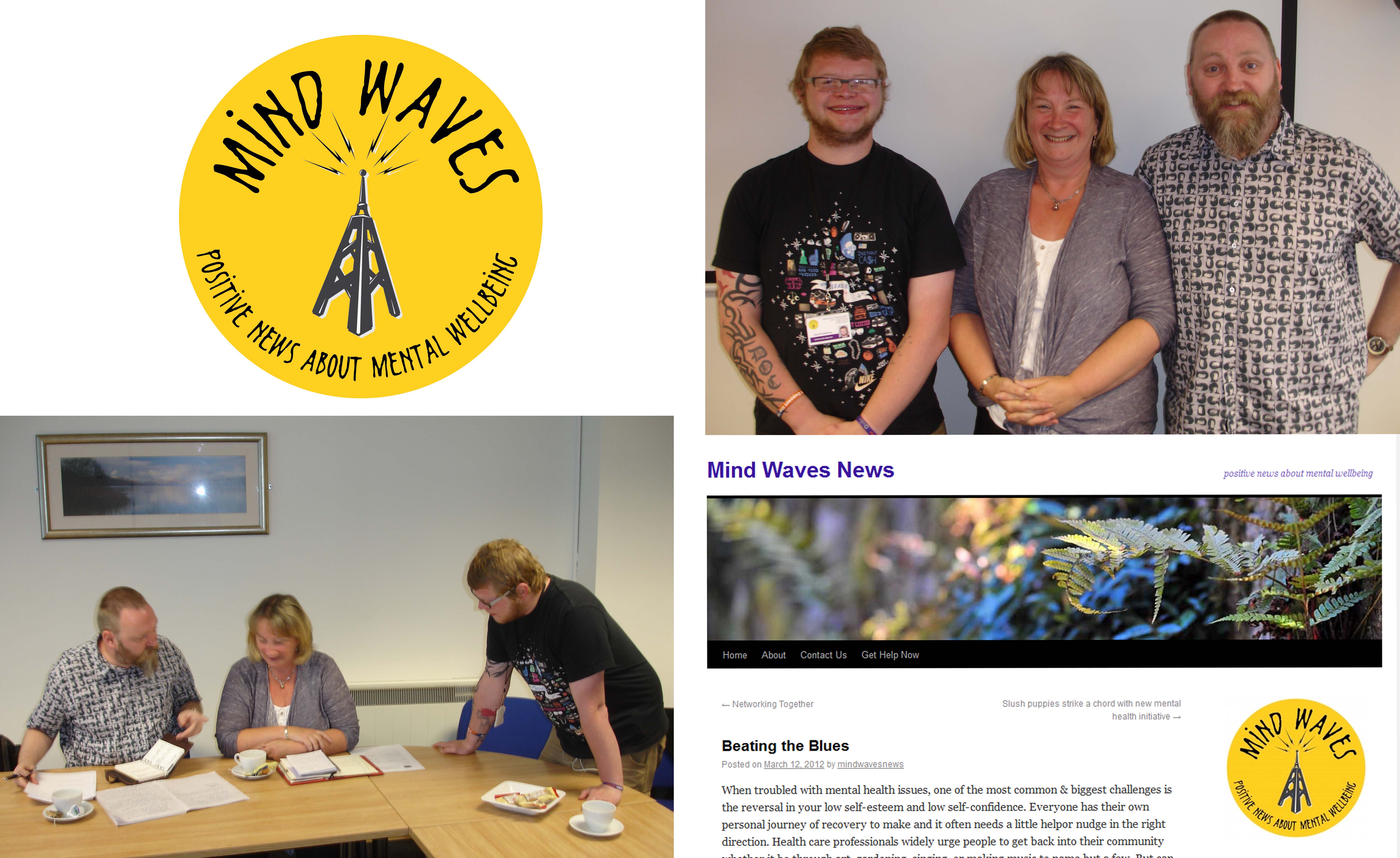 Like the particle physicists in the decades-long hunt for their elusive sub-atomic quarry, our fellow Tech4Good finalists and award winners have all been through journeys of discovery and ventured into unknown territories.  How to solve seemingly intractable problems, to dismantle barriers that hold people back from full participation, how to overcome false limitations.

Examples included dyxlexia support systems; mobile technology support to create two-way dialogue with aid recipients in Kenya (“info as aid”); citizen’s zone mobile IT learning suite in a truck that can taken to where people are, like the car park of an Indian restaurant in Preston; enhancing fundraising using online methods, to boost child welfare programmes in Uganda; and the fascinating work of a community run internet radio station in Brighton, that both empowers local communities to have a voice, and also actively reaches out elsewhere in the world. 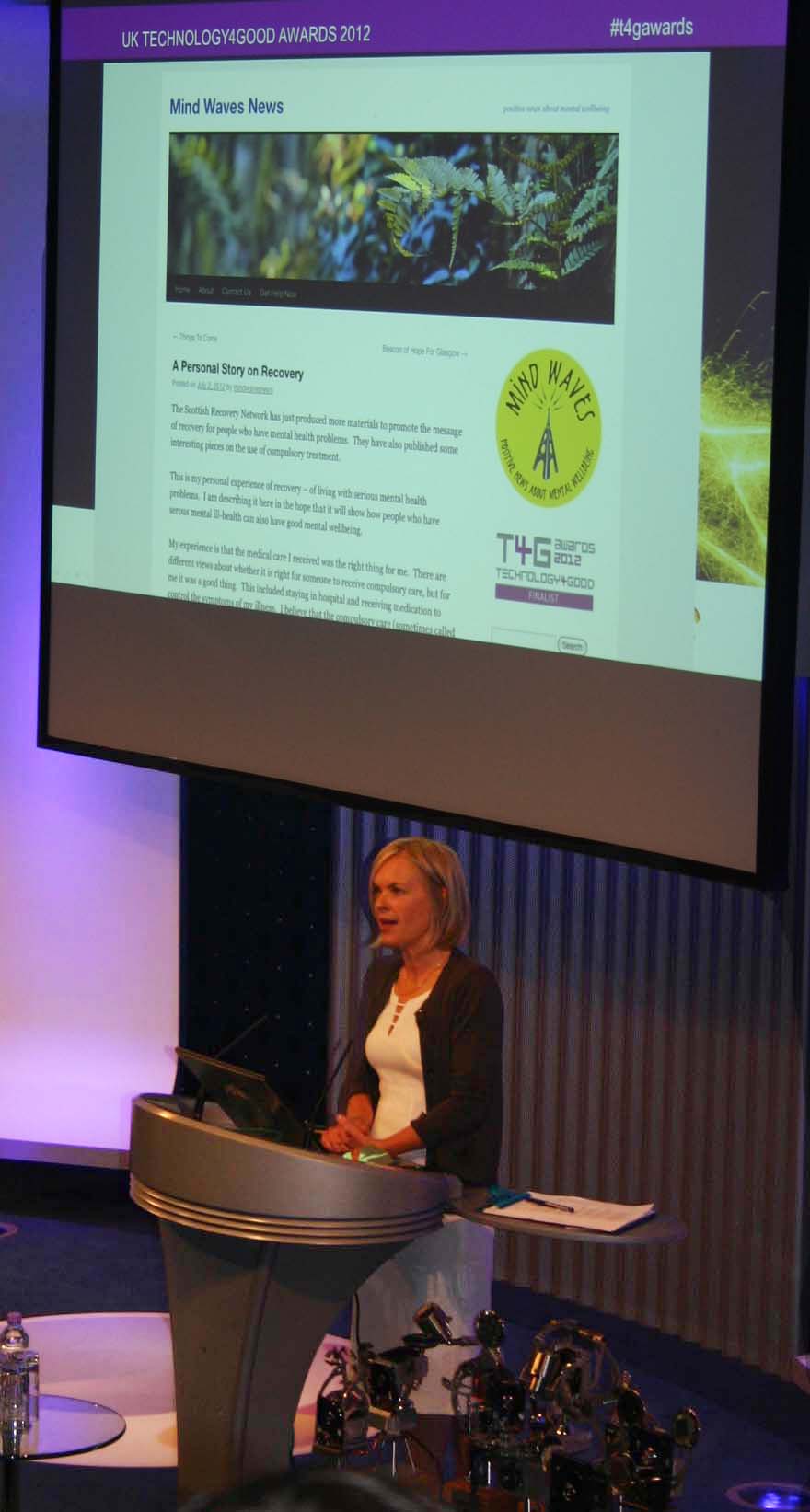 Mariella Frostrup presents a summary of the Mind Waves community reporters project at the Technology for Good Awards, 2012

As event host Mariella Frostrup summarised each of the finalists – including Mind Waves – Roy, Kevin and I shared a sense of pride in what our project has already achieved, particularly given that we have only been “live” for a few months.  We made some great contacts and received positive feedback, encouragement and great advice about further development options. And you may well see some very interesting guest contributions from fellow finalists in the months ahead, so watch this space!

But above all, what we learned from the other projects and colleagues present was: it’s all about the people-to-people interaction.  In other words, what ever technological solutions are being adopted, what really matters is enabling better quality human connection to achieve social change.

Some discoveries like the Higgs boson require huge teams of scientists, engineers, technicians, and the world’s most gigantic machine with its 9300 magnets. However, what Technology for Good demonstrates is that many more of us can be involved in harnessing technology, in making new discoveries about solving human problems, in forging new partnerships.  We’re certainly inspired to apply new learning in the next phase of our Community Reporters project and to opening up debate about mental health.  Why not share this journey and make your own discoveries and innovations for social good.

Praise and Recognition in London
Night & Day in London